Ageing cattle by their teeth

Age is an important part of livestock trading as many markets have age limits. Counting the number of permanent incisor teeth is the most common method of determining approximate age in live cattle. Note: MSA grading uses bone ossification, which is assessed on the carcase in the meat works. Obviously this method cannot be used on live animals.

Cattle, like many animals, start life with baby or milk teeth. From about two years of age these teeth are replaced with permanent teeth. Permanent teeth erupt in pairs starting with the centre pair. A tooth is considered to have ‘erupted’ when it has broken through the gum. A pair is considered to have ‘erupted’ when the first tooth of a given pair has broken through the gum. 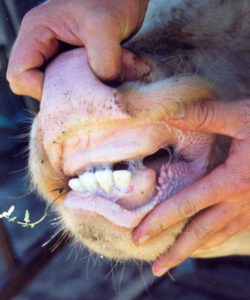 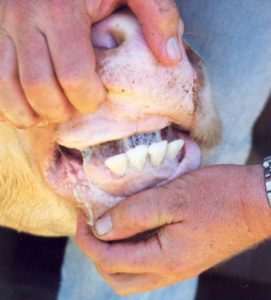 This is a 6 tooth animal. There are four obvious permanent teeth and two more either side breaking the gum. Note that you count the permanent teeth on the lower jaw. The upper jaw has no teeth – only a dental pad.

The range in age at teeth eruption varies enormously from beast to beast due to individuality, breed, nutrition and climatic influences. Cattle, such as British-bred cattle, that exhibit early sexual maturity (puberty) experience teeth eruption at younger ages than late maturing cattle, such as Brahman cross cattle.

This table shows that a beast with four permanent incisor teeth could be as young as 26 months or as old as 38 months.

Despite this inaccuracy, dentition (or teeth counting) is still a useful way to assess cattle age.

Below are visual representations of cattle dentition, courtesy of AUS-MEAT Limited.