The term ‘bull power’, encompasses what defines bulls as being fertile and how to manage them. Bull power has two elements: selection and management to achieve fewer and better bulls. This brief note discusses elements of bull management, as selection of fertile bulls is covered thoroughly by Beggs et al. (2013), (Veterinary bull breeding soundness evaluation), which have been widely adopted. The following discussion assumes the bulls being used have been vetted as sound as per Australian Cattle Veterinarians standards, ie, BullCheck. In addition, reproductive disease management is not presented as it covered extensively elsewhere; however it should be mentioned that bull power adjustment should be complemented with a biosecurity plan that considers vaccinations for your heifers, cows and bulls and potential risks from neighbours.

Fervently-held paradigms about bull management are one reason for relatively-low adoption of appropriate bull management recommendations. The traditional approach to bull requirements is the use of ‘mating percentages’. Typically, beef producers cite values between 2% and 6% as being necessary. All too often such values are without foundation in evidence-based science, that is, they are traditional opinions.

Opinions are reinforced by beliefs such as those listed and discussed briefly (Table 1).

One of the primary outcomes of excess bulls is loss of control. As the number of excess bulls increases, the infrastructure and management needed to control them increases. Seasonal mating becomes almost impossible to achieve with excess bulls around. As control is lost, the opportunity for transmission of reproductive diseases increases.

The simple answer to how many bulls are needed is, minimum requirements plus one for multiple-sire paddocks. This will avoid problems due to acquired bull sub-fertility during mating.

It is NOT recommended that ‘mating percentages’ be the basis of calculations to determine bull requirements. Rather, calculate bull needs by matching mating capacity of bulls to mating requirements of the females. The latter is calculated for peak mating periods.

An example calculation is shown in the box below. 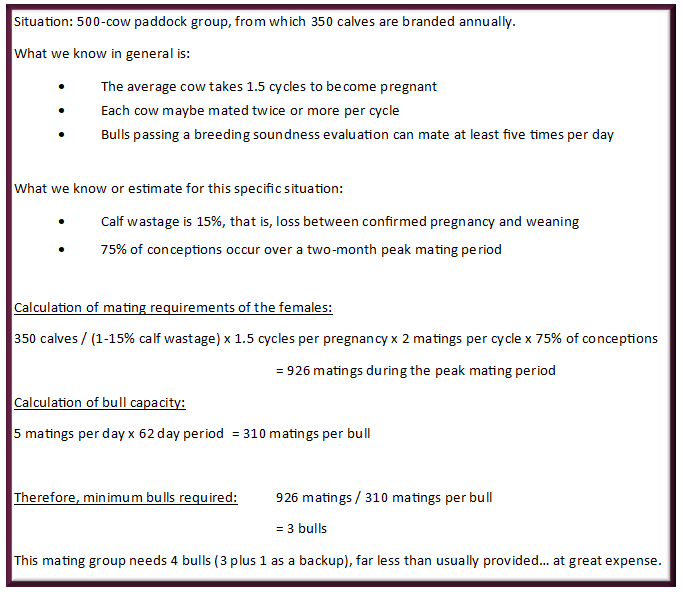 The analysis in Table 2 (below), works through the economic opportunities associated with matching bull capacity to female need. Halving the bull herd, which has virtually zero risk if vetted bulls are used, halves the substantial bull costs/weaned calf.

Table 2. An analysis of bull power for a naturally-mated beef herd.  The top section shows the overall situation.  The bottom section shows six options compared, one per column: using a large v small number of bulls, and use of 0%, 50% or 100% of home-bred bulls.

In the above calculations, an average maximum of five matings per bull each day is used.  Bulls can easily do this if the females are available (See the anecdote box). Every hour, a typical fertile bull produces more than enough sperm (estimated at 50,000/second) for 10 fertile ejaculates. At the bull to female ratios typically used, his mating limits are defined by his libido and access to females. In a typical low-fertility, continuously-mated northern forest herd with 4 bulls per 100 cows and the peak conception period is three months, a bull may get an average of just two mating opportunities per week!  No wonder they then fight viciously for the honour of mating. This HUGE gap between bull capacity and mating needs emphasises the opportunity to reap the benefits of reducing capital investment in bulls.

If the number of bulls being used is too many, almost invariably groups of two or three bulls will be found in the paddock away from cows during peak mating. Bulls establish, patrol and defend defined territories where they have dominance for mating. The most dominant hold territories close to or around waters. Bulls without territories either form small bull groups or become ‘lone raiders’ moving across territories. When bull numbers become excessive, fighting becomes much more intense, resulting in severe injuries such as broken legs. This occurs when the ratio of bulls to females is higher than 3.5%.

A common argument against using fewer and better bulls is that reducing your own bull herd allows easier access of neighbour’s bulls, when the neighbour clearly has vastly too many bulls. In this situation, the business owner must find solutions that suit them both. In regions where infrastructure is limited, taking advantage of improved bull power may best be tackled by a group of neighbouring businesses. (Note introductory comments about biosecurity.)

The benefits of fewer and better bulls

A major benefit of fewer and better bulls is better control of mating. There are fewer bulls to source, use and recover.  It opens up the possibility of secure seasonal mating in many situations. It provides a substantial contribution to venereal disease control measures.

Genetic improvement opportunities improve when access is created to bulls of higher genetic merit from the same budget; and, beware of the myth that price indicates genetic merit.

Embarking on the use of fewer and better bulls has an excellent track record with no reported cases of failure where bulls have been vetted according to ACV standards and single-sire mating is not practiced. Therefore, the risk is almost nil. A case study presented by Smith et al. (2016) showed a north Queensland producer reduced bulls from 16 to 4 for a group of 400 maiden heifers, based on matching need to bull mating capacity, saving the purchase of 12 bulls in that year. Adoption of better bull power management has since enabled the business to consistently reduce annual business costs by many tens of thousands of dollars.