Phosphorus supplement is put out two to three weeks after the start of the wet season. Cattle start looking for it about two weeks after eating green grass. 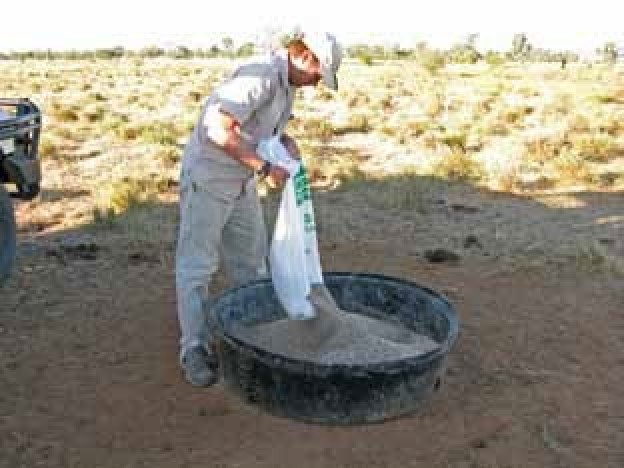 Tara Station, near Cloncurry, has been in Dan Lynch’s family for generations. Tara is a 14,000 ha property comprising 90% black soil and 10% red country. Most paddocks have some hard ridges that are important during the wet season. The black soil carries Mitchell grass and Flinders grass whereas pulled country has been seeded to buffel. The red country with hard ridges has silverleaf box and spinifex.

When Dan took over from his father in the late 1990s he realised that the current grazing practices were not sustainable. Controlled mating tightened the calving window, and culling all empty breeders increased breeder efficiency, allowing him to stop feeding dry season supplements. Instances of peg-leg at a neighbour’s property started Dan hand-mixing his own phosphorus (P) lick for a wet season supplement.

The total herd is about 4,000 mainly Brahman breeders and heifers, with 2,000 of these running on a nearby agistment block of silverleaf box and spinifex country. Paddocks on both properties are grazed in rotation, with Tara having 42 paddocks averaging 365ha and with two to four watering points in each.

About 2,700 calves are branded. Males are turned off at 17 months weighing 370kg to whatever market is paying best. This is mostly live export but could be to southern markets. Cull females are sold direct to meatworks in either Townsville or Rockhampton.

After weaning, steers are given phosphorus supplement during the next wet season and then sold at about 17 months. All heifers receive wet season P, with replacements seasonally mated at two years of age. Bulls go into the breeder herd in mid-January and come out on the pregnancy test muster in May or June. All empty cows are culled so few reach old age. All breeders and bulls are vaccinated with C and D botulism each year.

Dan finds that getting as much phosphorus as possible into the breeders during the wet, along with controlled mating, reduces the need for costly dry season supplements. Now he provides dry season supplements only in bad years, for example, he fed 0.8–1g urea per litre of water delivered through water medicators in 2010 when rain spoiled the dry grass.

In response to chronic peg-leg and bone breakages, Dan started using a cement mixer to make his own P supplement, and he fed his mix of Fermafos™, salt, lime and a true-protein source to cattle during the dry season. He then got a local feed merchant to mix the recipe for him.

Feeding the mix during the dry season gradually evolved to a wet season supplement. Work with the local feed merchant has led to the current mix of 48% Kynofos™, 10% urea, 5% sulphur, 20% salt, 4% lime, 12% cottonseed meal plus 1% mineral mix.

The plastic supplement troughs are not covered because it would make them too heavy and awkward to shift all the time. The plastic troughs are light and can be easily shifted on the quad bike.

Each week at Tara, Dan puts out five to six days’ supply of lick (four 25kg bags per trough) in two small plastic troughs at each water. He uses a quad bike to carry at least four bags— two on the front, two on the back – and has made a metal frame to allow him to stack four or more plastic troughs on the back when needed.

On the agistment property, he puts out a month or more supply of lick at a time into larger plastic troughs with holes in the bottom. He keeps an eye on the weather using Rainman and the Bureau of Meteorology website and puts out what he thinks will last until the rain. The amount going into the troughs changes depending on the weather.

He says that it is not too big a problem as he has to go to only two or three paddocks to feed the entire herd due to the regular rotations. This may take a day in the Toyota in dry weather but two days in the wet using the four-wheeler.

In big wet years such as 2009, he had trouble getting lick out when it rained for over a month but put it out as soon as possible and did not notice any change in production. All lick loads are logged on a whiteboard in the shed and consumption monitored.

The Tara operation was modelled using Dan’s good data for weaning and death rates and sale weights. These represented averages over the 10 years since the current management system was implemented. The benefit of feeding the phosphorus supplement cannot be separated from the other changed practices.

The calculated gross margins (GM) and adult equivalents (AE) are shown in the table below. The breakup of GM between breeders and steers is based on an assumed transfer value of weaner steers (1,320 at 154kg at five months) of $257/head net.

The marked disparity of GM/AE between the breeding and fattening parts of the enterprise is consistent with all previous similar modelling, with the high return on the steers being aided by the low AE rating (0.51) on account of their light weight.

These results represent a combined return to a number of husbandry practices including seasonal calving (reducing the need for supplementation), and careful control of nutrition through grazing management, F.NIRS analysis and wet season P supplementation.

Cattle need phosphorus (P) for almost every vital function of the body. Head to the phosphorus hub on the Meat & Livestock Australia (MLA) website for more information.