The fertility of a breeder herd has a significant impact on the profitability of a beef breeding business. Basically, more weaners from a set number of breeders over a defined period (12 months) is more profitable.

The next bull you purchase is a key factor that will impact on the reproductive performance of your breeder herd, and can have an impact on your herd for the next 10–15 years. This will arise from keeping a selection of his daughters (or sons) to enter the breeding herd (i.e. self replacing herd).

The question to ask is: “How do I know that the bull(s) I am selecting will have the genetic package to produce very fertile daughters?”

There are currently two pieces of genetic information that can be used as a guide to selecting bulls with ‘good’ fertility genetics. These being genetic differences (BREEDPLAN Estimated Breeding Values – EBVs) for Scrotal Size (SS) and Days to Calving (DC).

Scrotal Size (SS) EBVs are estimates of the genetic differences between animals in scrotal circumference (cm) at 400 days of age.

Scrotal size is measured by BREEDPLAN members from behind the animal (Figure 1). The scrotum containing both descended testes is measured using a tape positioned where scrotal circumference is greatest. At the same time, the scrotum can be palpated to detect abnormalities. 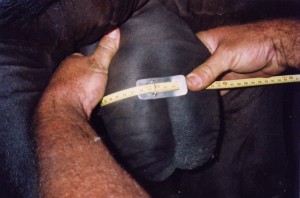 Increased SS is associated with increased semen production in bulls, and earlier age at puberty of bull and heifer progeny. SS also has a small favourable relationship with Days to Calving (DC), such that bulls with larger SS tend to have daughters with shorter DC.

A raw SS (e.g. 36cm) and SS EBV (+1.7cm) on sale bulls should not be confused as they indicate slightly different traits. A raw SS should be used to indicate if a bull has a higher probability of being fertile himself (i.e. is able to get his share of cows in calf). The threshold for 2-year-old Bos indicus sale bulls on ‘good’ nutrition is 34cm.

Bulls selected for high SS EBVs are expected on average to breed daughters with earlier puberty and with shorter days to calving.

Days to Calving (DC) EBVs are estimates of genetic differences between animals in female fertility, expressed as the number of days from the start of the joining period (i.e. when the female is introduced to a bull) until subsequent calving (Figure 2).

When a bull is introduced into the female herd at the start of mating, some cows or heifers are more likely to conceive at the beginning of the mating period, whereas others tend to take longer to get in calf. Variation in DC is mainly due to differences in the time taken for females to conceive after the commencement of the joining period (Figure 2).

Females with shorter DC EBVs tend to return to oestrus sooner after calving increasing their chance of producing a calf every year. Females with shorter DC EBVs also tend to be those which show early puberty as heifers, and conceive early in the joining period. Because females with a shorter DC EBV are more likely to go into calf earlier in the joining period, they calve earlier than their contemporaries. The calves may be smaller and less prone to causing dystocia and they also have more growing time in the lead up to weaning.

Negative DC EBVs indicate a shorter interval from the start of joining season until calving. Days to Calving EBVs may be reported for sires and dams – however it is likely that only animals with reasonable accuracies will appear in catalogues. The DC EBVs are reported in days and will generally have low accuracies until a sire has a large number of daughters with days to calving records.

As you can see in Figure 2, Days to Calving should not be confused with the length of gestation. The Gestation Length EBV provides an estimate of the genetic difference between animals from conception to calving and is commonly recorded for calves conceived by either AI or hand mating as it requires the exact date of conception. The Days to Calving EBV is currently only calculated for natural joinings where the actual date of conception is usually not known.

Results from Beef CRC research with Brahman herds have shown that significant economic gains can be made by selecting bulls with superior genetics for reproductive traits such as Days to Calving. One bull in the project was shown to reduce the days to calving of his daughters by up to 15 days. This equates to more than a 15% difference in calving rate, with the added benefit of steers being born early in the calving period and within a shorter space of time, providing significant advantages when preparing and managing sale progeny. The project also found that the age of puberty in heifers (evaluated by regular ovarian scanning to detect the age at first corpus luteum) is strongly genetically correlated with both days to calving and calving success following first joining of heifers at approximately 25 months of age.

Note that there is only a small favourable relationship between SS and DC. Therefore it is strongly recommended that you select for the DC trait directly if you want to improve female fertility.

Research by the Northern Territory Department of Resources showed that a Brahman herd that selected for these fertility traits increased yearling heifer conceptions rates by 35% and increased lactating cow re-conception rates by 31% when compared to commercial animals under the same environmental conditions. This herd demonstrates that applying strict selection on fertility traits can result in significant improvements in herd fertility and overall profitability.

Because of the value of the DC EBV it is strongly recommended that bull breeders supply DC EBVs with sale bulls and females, and that bull buyers request them.

Progress can be made in fertility by selecting bulls that have the right genetic package. Indicators of bulls with a good genetic fertility package are those with an above average SS EBV and below average (negative) DC EBV. Other EBVs (e.g. weight, carcase) should be included in a balanced package of traits.

The reproductive ability of the bull to sire calves and pass on desirable genetics is a critical factor. Bulls selected must pass a Bull Breeding Soundness Examination (BBSE). A BBSE should include a sperm morphology assessment to determine a bulls’ percent normal sperm, an indicator of his ‘calf getting’ ability. This trait is also heritable, and is genetically related to the interval from calving to first oestrus cycle in females.

If breeding is your main enterprise, keep in mind both the genetic and environmental factors that impact on the fertility and productivity of your herd. A combination of selection for low DC EBV bulls with above breed average scrotal size, and a stringent culling program for non-productive cows will help to enhance the reproductive performance (and therefore profitability) of your herd.