The key objective of seasonal mating is to reduce the period of lactation in the dry season. This will preserve body condition, support healthy egg development and ovarian function for cycling following calving, and improve herd reproductive performance. Other benefits of seasonal mating include:

Seasonal mating as part of a sound integrated management system will achieve:

When should the mating period begin?

There are a number of factors to consider:

What length of time should the mating period be?

When first commencing seasonal mating a seven month mating period is recommended for breeders. This will result in two months when breeders are “lactation free”. Start by removing the bulls at the last weaning round of the year. A calving spread over five months can still be achieved through foetal ageing at the last round and removing empty cows. However early pregnant cows will not be detected.

Over time, a shorter mating period can be achieved with good nutritional management of breeders, targeted disease control, improved bull management and selection. Remember a minimum nine week mating is needed to give cows a 95% chance of conception (if they are all empty at the start of mating), and a further two months to detect pregnancies in the later cycling group.  With shorter mating periods bull performance becomes even more critical and attention to bull selection for fertility is crucial, particularly if using low bull percentages or single sire mating.

When should foetal ageing occur?

There can be a lot of variation between systems, production targets and marketing policies, and environments. This makes it difficult to state when foetal ageing should occur without knowing the particular system. To detect all pregnancies foetal should be conducted no earlier than two months after the bulls come out. However if the bulls come out at the last round then foetal ageing should be conducted then. Dry cows can be tested at the first round to identify sale opportunities.

When seasonal mating it is very important to wean strategically to manage the body condition of breeders. In some years and in some environments it may be necessary to wean earlier to reduce loss of body condition, caused by the nutritional stress of lactation. If weaning is not carried out at an appropriate time, and is delayed, there is the potential to have the majority of breeders in low body condition all at once (and requiring supplementation). In addition to poor body condition, the suckling effect of the unweaned calf can impact on a cows’ ability to cycle. If cycling is delayed this can throw out the calving pattern and result in late calves and potentially lower weaning rates.

Putting a plan together

Taking all the considerations into account, develop your plan by drawing it. Label the 12 months of the year either on a circle, graph or table. Identify when mating, calving, weaning and foetal ageing will occur. The following two figures are examples. 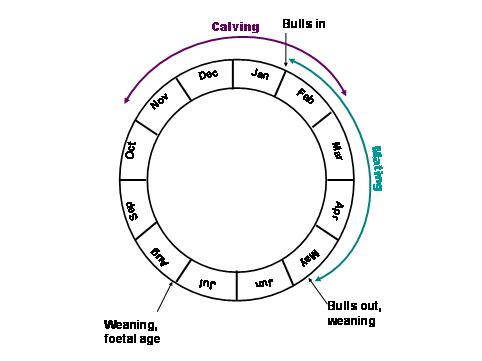 Once the basic plan is in place other management practices, such as supplementation and bull disease management, can be added.

Segregating, and seasonal mating, of first and second calf heifers is a suggested starting point.

If bulls can’t be controlled, seasonal mating can still be achieved by foetal ageing and removing ‘late calvers’ or late pregnant cows.

For more information on improving herd reproductive performance and genetics, a Breeding EDGE workshop is recommended.