Imagine if you could control livestock movements without using fences or pressure. According to researcher Dr Dean Revell and NSW sheep producer Bruce Maynard, you can. 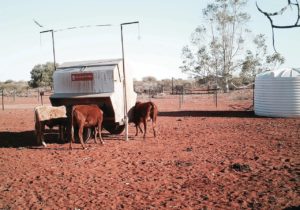 Dean and Bruce have developed a livestock management strategy called ‘self herding’. It involves allowing animals to become familiar with signals and attractants that can be used as guides to shape their movement through the landscape.

“The broad principle is to use attraction and positive feedback rather than exclusion or negative reinforcement,” Dean said.

“The main tools we use to do this are nutritional attractants and associated signals, such as sight, sound, smell or taste.”

A signal is the first thing that triggers a response because it can motivate the animals to develop a behaviour and, over time, the animals become conditioned to respond to the signals and associate them with a reward.

In practice, this may mean that a witches hat or a CD hanging from a pole to catch the sun, or even windchimes, are linked in the animal’s mind with a tasty treat of a mineral lick or salt. An extra special reward, such as molasses, pellets or crushed lupins, paired with a unique signal, such as a whistle, can be used as a jackpot.

“Once an area is set up as preferred, then it becomes reinforced as more preferred. It’s like a popular restaurant – being popular is an attractant in itself.

“With self herding, we’re changing that. We’re setting up a new habit to take over the old habit.”

Over time, the new grazing behaviour in itself provides a benefit because the animals become more used to going to other areas and they broaden their diet, which Dean said had implications for animal health and productivity.

“Self herding is particularly relevant to the rangelands but is also relevant on a smaller scale,” he said.

“In a paddock trial at Kidman Springs in the NT, the managers are successfully enticing the animals into areas they had not been using, which relieved the pressure on an over-utilised patch.”

As well as the obvious benefits, self herding improves the relationship between people and animals, with many associated benefits.

“The idea is to change how animals respond when people arrive in the area,” Dean said.

“The benefits of that are enormous, from easier yard work through to better performance of animals after transportation from one location to another.”