What has happened to the Mitchell grass on the Barkly?

The Barkly Tablelands are well known for productive Mitchell grass plains. However, there is growing concern about this important native pasture, with recent widespread Mitchell grass death occurring during the several years of poor rainfall across the region.

Mitchell grass is an essential component of the productivity of the black soil grasslands. Without Mitchell grass, pastures can become dominated by unpalatable wiregrass and palatable but short-lived annual grasses and forbs. This reduces carrying capacity and the ability to feed stock throughout the year. Stock can do well without Mitchell grasses over the wet season, but they rely on it throughout the dry season and it is the key to the ability of the Barkly to support large cattle herds.

Declines in the abundance and vigour of Mitchell grass are often referred to as ‘dieback’. While it certainly isn’t common, dieback has been reported in Queensland Mitchell grass landscapes in the 1900s, 1930s, 1960s and the early 2000s. There is plenty of evidence to suggest that dieback can have several causes in addition to conditions being too dry for too long (Phelps et.al. 2007). Grazing management, physical damage to the tussocks and changes in fire regimes can also contribute to the extent of dieback. Unfortunately, recovery can be a very lengthy process.

Lifecycle of a Mitchell grass plant

In a good wet season, Mitchell grass pastures can produce 200 seeds/m2. This seed will be ready for germination in the following wet season with about 10% of the seed supply carrying over to the second year (Partridge, 1996). Germination events appear to be relatively uncommon and it is likely that conditions need to be highly favourable. Observations on the Barkly suggest that an early start and an extended wet season are most conducive to germination (Materne, pers. comm. 2021). Most seedlings die in false starts to the rainy season and a first-year seedling needs two growth events in order to develop secondary roots, which will allow it to survive the subsequent dry season.

Mitchell grass reaches maturity at three years and can live for up to 30 years. A mature plant can grow new stems from basal tillers following good rain, and new leaves and secondary tillers on old stems after moderate rain. Secondary tillers develop approximately 20 cm up a primary tiller, and are valuable because they are capable of producing leafy material in the drier years (Materne, pers. comm. 2021). Mature plants are capable of drought dormancy, where they shut down tissue growth and reduce the water uptake of their roots to a minimum.

Mitchell grass seedlings are vulnerable to physical damage from cattle through both trampling and grazing. Mature Mitchell grass tussocks are also vulnerable to physical damage, particularly when they are in a weakened condition due to drought. Spelling allows seedlings and recovering mature plants the best chance to grow in size and develop strong root systems, making it more likely that they survive the next dry season and possible drought ahead.

Management of Mitchell grass during drought

The goal is to keep as many tussocks alive throughout the drought as possible. This means that Mitchell grass should be allowed to grow as much as possible when conditions are suitable for growth. Even if seeding is not achieved, small rainfall events can help maintain root systems and keep tussocks alive for longer.

When possible, destocking during drought is the optimum management for maintaining productive Mitchell grass pastures. Destocking is a tough decision and is something that is more easily planned when conditions are reasonably good. It might be possible to destock the most productive country first, so that it has the best chance of recovery when good conditions return.

Of course, it can be hard to determine how bad a drought is until you are well into it. When destocking is not possible or has to be delayed, Mitchell grass should only be lightly grazed in drought conditions, and the animals shouldn’t consume more than 10% of plant growth (Partridge, 1996). When conditions are good, Mitchell grass can withstand occasional short periods of heavy grazing but utilisation needs to be restricted during dry periods. The long-term recommended utilisation of 20% will help maintain pasture resilience, which becomes especially important for pasture growth in years of low rainfall (Walsh and Cowley 2011).

After a short drought (1-2 years), most recovery will take place from tussocks that are still alive. Seed stored in the soil would still be viable and Mitchell grass may re-establish from seedlings however, recruitment events aren’t very common. If the drought has been longer (3-5 years), the seed store will have been depleted through seed decay and lack of seed production. In that situation the surviving mature plants are vital for creating new seed so the top priority is always to allow any remnant Mitchell grass plants to recover. Surviving tussocks need time to grow in size, rebuild root structures and set seed.

If the area of dead Mitchell grass is large then recovery will be slower, due to the sparsity of surviving tussocks and the distance needed for seed to disburse. Looking after any remnant and establishing tussocks will make recovery as quick as possible.

In reality, it will take several wet seasons for Mitchell grass pastures to fully recover from a prolonged drought. The good news is that bio-economic modelling has shown that within a few years, wet season spelling improves land condition and pays for itself. Although initially cattle production will be reduced due to the need for lower stocking rates, the associated pasture recovery leads to better returns than putting up with poor land condition (Phelps & Houston 2014). Various approaches to spelling have been developed in the Barkly. Depending on the circumstance, options such as turning off selected water points may be effective, rather than resting an entire paddock. Care needs to be taken to not overstock other areas when spelling country. 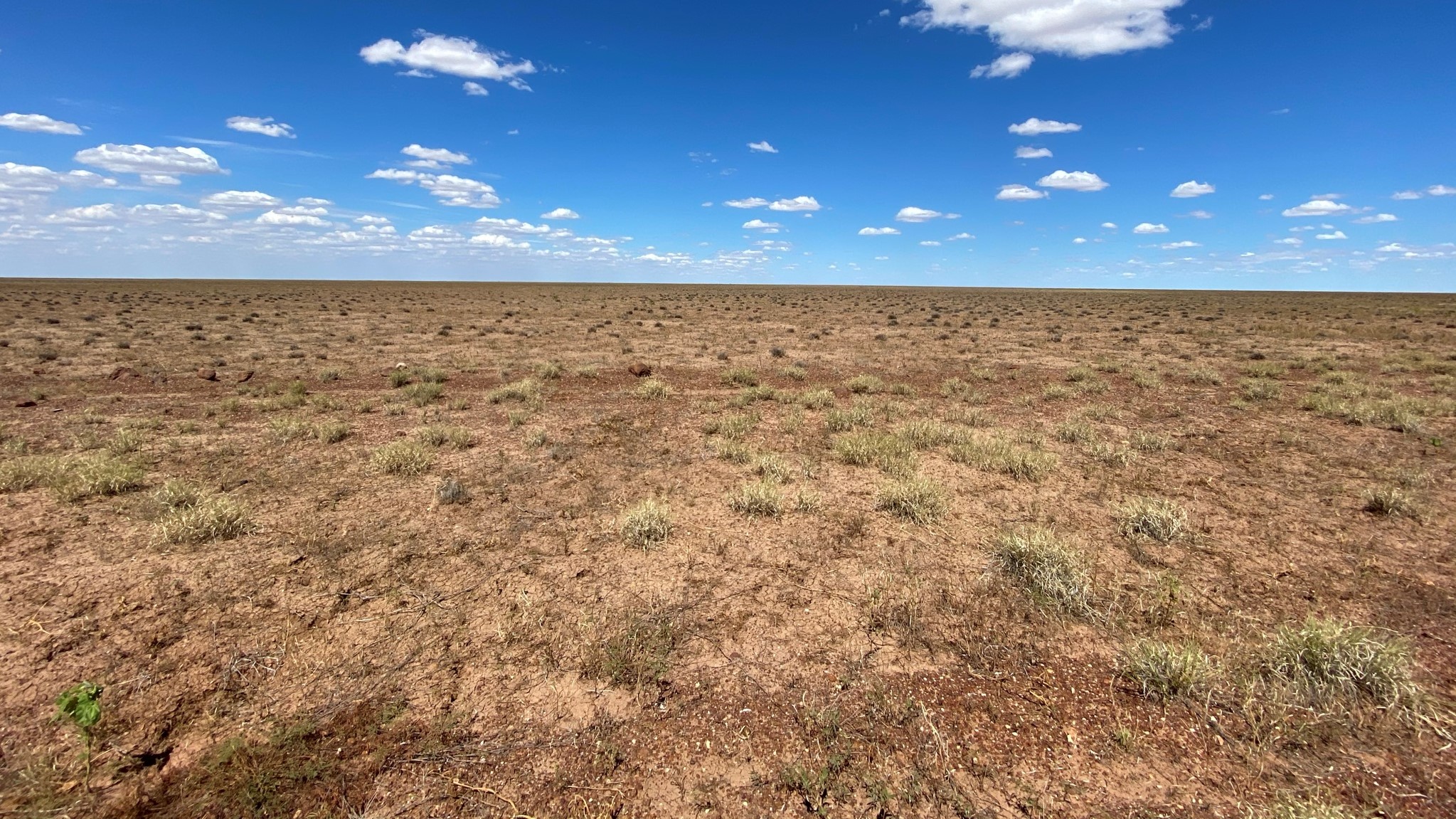 For land in good condition, where plenty of Mitchell grass tussocks have survived, the pasture may recover from a short drought over one or two wet seasons. If possible, an early wet season spell of a few months may do the trick, although most producers find a full wet season spell to be more practical (Walsh and Cowley 2014). The increased availability of regular satellite imagery is rapidly becoming a vital additional tool for assessing response to rain, monitoring utilisation, and for informing decisions on stocking and carrying capacity.

For land in poor condition, with few surviving tussocks, the aim is to rebuild seed supplies. In practical terms, this might mean difficult decisions such as wet season spelling and lowering the stocking rate until the recovery is complete. Recovery may take 3-5 years; 1-2 years for remaining tussocks to set seed and build seed reserves, then another 2-3 years for seedlings to grow into established tussocks capable of surviving the next drought. To maximise seed production in the first 1-2 years, wet season spelling is the ideal approach. Where that is not possible, keeping stocking rates low is the next best option. Throughout the 3-5 year recovery phase, grazing in the dry season should not consume more than about 10% of plant growth (Partridge, 1996), so extra monitoring of utilisation rates may be needed to ensure that pasture recovery is as fast as possible.

Wet season spelling encourages root growth to depths of more than 1 metre. Increased root development leads to better infiltration of rain, and deep, vigorous roots can access soil moisture for a longer period in the dry season, which becomes particularly important if it a bad wet season comes up. Spelling in the highest rainfall wet seasons may provide even greater benefit.

Fire is known to help stimulate Mitchell grass yield, tillering and seed production at least when followed by above average rainfall (Scanlan 1980; 1983). Researchers investigating dieback in Mitchell grass in Queensland found evidence that sites that had a single burn at some time prior to drought recovered better after drought (Phelps & Houston, 2014). It is thought that the vigorous growth following fire helped to establish more robust plants although it wasn’t possible to make management recommendations due to the variability in the findings.

Like most things in life, there are certain myths around Mitchell grass drought recovery that probably should be extinguished!

Myth: Seed can be buried in deep cracks for many years before rising to the surface.

There are stories of Mitchell grass seed persisting for decades before germinating however it is unlikely that seed lost down a deep crack will find its way to the surface many years later. In fact, it appears that Mitchell grass seeds are only viable for a few years (Orr, 1991). This may explain why Mitchell grass recovery is often best after two consecutive, above average wet seasons; the first to produce the seed and the second for seedling germination.

Where Mitchell grass death has occurred, the most important task is to allow any remaining Mitchell grass plants time to recover, get bigger and set seed. This might only take one good wet season spell if tussock death isn’t too extensive.

Where tussock death has occurred over large areas, it is possible that two consecutive wet season spells with minimal or no grazing in between could be required. Minimising cattle activity for as long as possible will help protect recovering and establishing plants from being trampled.

Once seedlings have established, ongoing wet season spelling is recommended until the tussocks are mature. Dry season grazing could be managed to ensure only 10% of the annual growth is eaten until the pasture has recovered.

Building the seed bank and managing grasses until they reach maturity will go a long way towards Mitchell grass recovery, however, it is almost always a lengthy process.

Want more information about managing grazing and land condition on the Barkly Tablelands? Here are a few resources you might like:

Best-bet practices for managing grazing land in the Barkly Tableland region of the NT PDF (1.7 MB)

Phelps, D.G. and Houston, I. (2014). “A guide to the recovery of Mitchell grass”. North Sydney, Meat and Livestock Australia