As we get into the tough end of the year with the wet season somewhere ahead of us, some producers have plenty of dry grass and some have very little or none.

Every year the scene seems to be the same – some properties are always short of grass and others have plenty.

As a land and cattle manager/owner, how is your patch of country looking at the moment? Bare ground and/or poor land condition is a reflection of the management of your resource – like a report card.

The Far North Queensland beef team travel extensively across all districts and could easily fill out a ‘report card’ while driving along regional roads at 100km an hour. How do property owners travelling around their own place daily not see what is happening and what they are putting their cattle through – extended periods of low grass supply or cattle starvation.

We have to match cattle numbers with grass supply.

No matter what the excuse, one thing is for sure – starving cattle produce low returns.

There is an increasing community awareness of environmental issues and the Queensland government has introduced regulations for graziers in the wet tropics, the Burdekin and Mackay/Whitsundays to reduce sediment moving into the Great Barrier Reef. We already know that land condition is closely tied to leasehold renewal. Producers who continue to overgraze their country are giving the beef industry a bad name, and it will no doubt lead to more regulation over the entire industry. It’s time for land managers to take control of the situation.

This photo (October 2009) along with district rainfall for the previous 12 months show that, clearly, drought is not responsible for this outcome. 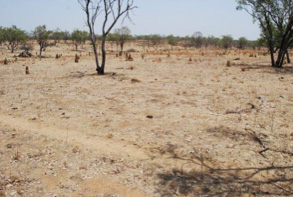