In recent weeks there has been a lot of discussion regarding the cause of Mitchell grass death in the Australian rangelands, which prompted an active discussion on Twitter. The article below is a summary of the questions asked by FutureBeef Twitter followers, and the responses provided by Dr Mitchell Grass himself, Dr David Phelps.

Q: Suitable establishment conditions for Mitchell grass occurs only once every 20-30 years. Would the dieback recently observed have anything to do with the tussocks all reaching ‘old age’ at the same time?

A: The short answer to the question is yes, Mitchell grass death certainly does occur from ‘old age’ and can be part of the dieback story.

Don’t get me wrong, Mitchell grass is as tough as nails, very productive and lives much longer than most other grasses under extreme conditions. It’s more-so that we know a lot about Mitchell grass thanks to decades of science. The earliest documented studies were roughly 100 years ago!

When you see circular patches of dead Mitchell grass, which could be anywhere from two to three meters across, up to a couple of hectares, the most likely culprit is the curl grub.

Curl grub is the larvae of the carab beetle (Scarabaeidae species), and while we don’t know a lot about it, we think they breed up in better seasons in forest country (e.g., in the desert uplands, north of Charters Towers, or up in the Gulf) and catch wind currents to spread across the Mitchell grasslands. The adults lay their eggs, and then when the larvae hatch, they feed on Mitchell grass roots at 15-25 cm depth. They cut off the roots and kill the plant above them. They also eat star grass roots, but don’t touch feathertop wiregrass. Apparently, nothing eats feathertop!

If you see ‘rows’ of dead Mitchell grass ― especially if these alternate with rows of live plants ― there is a pretty fair chance this is due to the soils. Large areas of Mitchell grass clay soils have patterns of low ‘hills’ and ‘valleys’, of only about 2-10 cm difference in height. There is usually only 1-2 m between the peaks of the ‘hills’ and the bottom of the ‘valleys’. These are known as linear gilgais and are a common feature of many clay soils. During extended and severe droughts, the ‘valleys’ collect more run-off when it does rain and have higher soil moisture. This provides the Mitchell grass with better growing conditions and promotes better survival. There are rare instances where this is reversed due to water-logging in the ‘valleys’ during really big wet seasons.

Extended droughts kill Mitchell grass, even though it is one of the world’s most drought-hardy grasses. Our long-term grazing experiment near Julia Creek (from 1984 to 2010) found that plant size is crucial for survival. All Mitchell grass tussocks that were smaller than 5 cm diameter at the base died during the 1984–88 drought. For these smaller plants, grazing pressure made no difference. However, higher grazing pressure stunted the recovery of the larger Mitchell grass plants and made it tougher for them to survive future droughts.

Our highest grazing pressure in the experiment adjusted stock numbers every May to eat 80% of the feed on offer over the next 12 months. These Mitchell grass plants were half as likely to survive as plants under low grazing pressure (10% pasture use). Wet season spelling substantially increased the survival of Mitchell grass. The best thing you can do to help Mitchell grass recover from drought is to spell country in the first summer or two, until plants are healthy and seeding.

Q: What about flooding and waterlogging?

As a rough guide, curly Mitchell can tolerate about a week of flooding, and bull Mitchell up to about three weeks. This time is reduced when the water is stagnant instead of gently flowing. Fast moving water that gouges the soil away from the base on plants and exposes the roots can weaken and kill Mitchell grass depending on the conditions after the erosion.

Q: What about the effect of fire on Mitchell grass survival?

A: In general, fire is good for Mitchell grass. Extremely hot fires can kill Mitchell grass, but generally fire stimulates it to produce more seed and grow better. Experiments in the Julia Creek, Longreach and Blackall districts over the 1970s through to the early 2000s found that Mitchell grass would produce twice as much seed after being burnt compared with not burnt, so long as average or better rain was received.

Below average rain did not kill the burnt plants, but they did not grow as well as plants that had not been burnt. We do not know if fire has a role in keeping Mitchell grass plants healthy and vigorous to avoid dieback, but it is worth studying further.

Q: Is lightning likely to have caused patch Mitchell grass dieback in the rangelands?

A: Lightning activity generates nitrogen in the atmosphere, but it is difficult to find information on how much is added to our soils. The nitrogen needs to dissolve in raindrops to be useful, and the amount of nitrogen available in individual storms is probably too little to make a difference to Mitchell grass seedling establishment. Over very long periods of time lightning is likely to contribute nitrogen, but native legumes and biocrusts probably add greater amounts.

It is unlikely that lightning would cause patch Mitchell grass death in the rangelands, although it may start a fire. 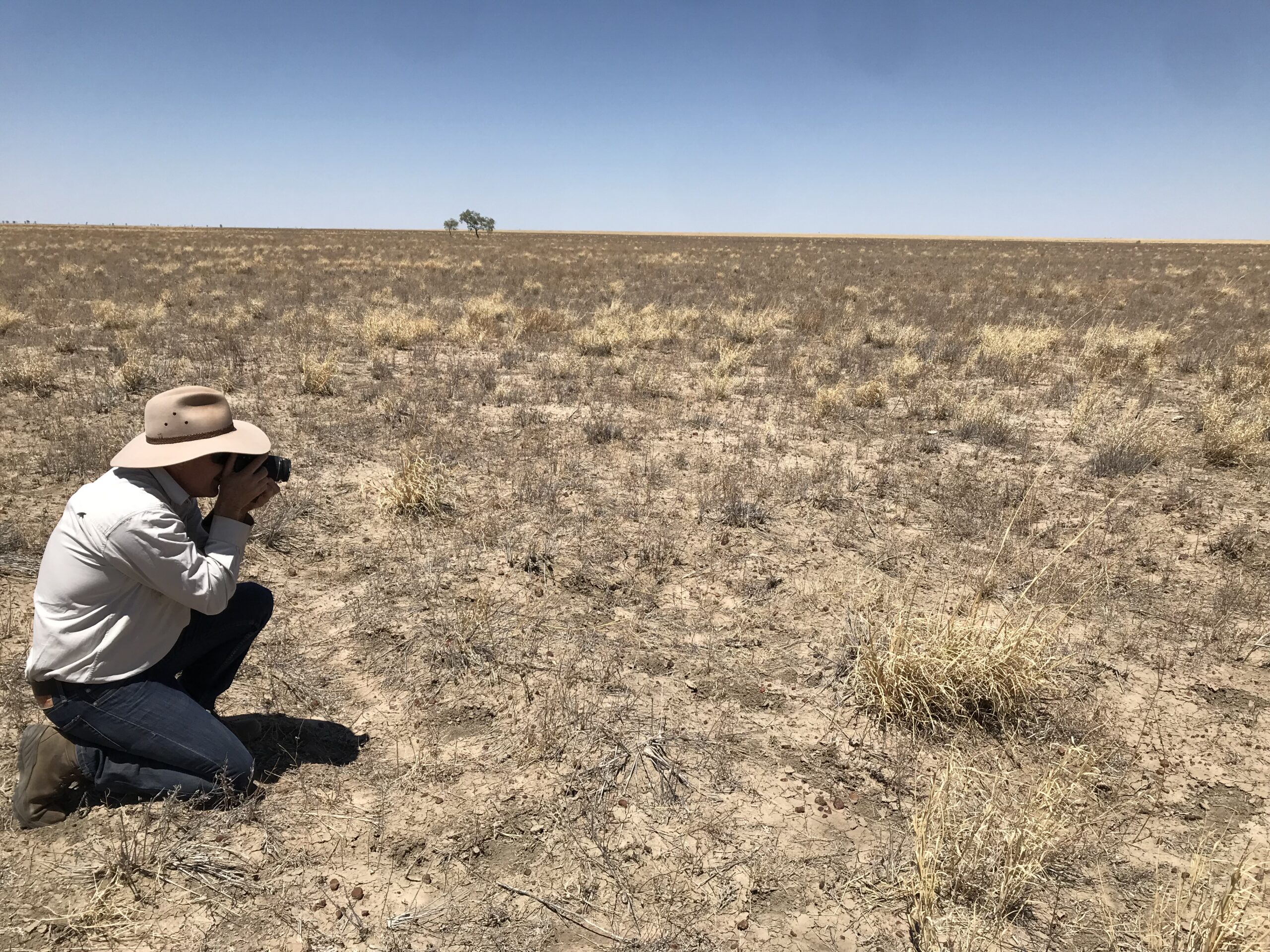 Q: Is there a difference in soil type between Mitchell grass survival?

A: Ashy soils, which are found from the south of Richmond through to Kynuna, and in pockets to the north of Hughenden, around Blackall, Barcaldine and south of Longreach, behave differently to other Mitchell grass downs soils.

Ashy soils are ‘powdery’ on the top and the cracks are deeper and wider than most other Mitchell grass downs soils. We do not know enough about ashy soils, but we think that the larger cracks lead to higher evaporation of moisture and that more rainfall is needed to wet the soil at the start of the wet season. The ‘powdery’ nature of the soil also makes it easier for Mitchell grass plants to be pulled out of the soil, roots and all.

The combination of powdery soils and deep cracks, pose a risk for smaller Mitchell grass plants to be ‘yanked’ out of the ground by cattle grazing at the start of the west season. Early wet season spelling for a few weeks until the majority of Mitchell grass has gone to seed reduces this risk and helps pastures recover.

Q: Is Mitchell grass dieback the same as what’s been observed on the east coast?

A: Whilst more studies can always reveal more information, we do not think that the dieback reported in eastern Queensland pastures is related to Mitchell grass dieback. For Mitchell grass, dieback is mainly drought related and is usually reflected in a lack of response once it does rain. Studies during the Millennium drought suggested there could be ways to keep Mitchell grass vigorous and healthy going into drought that allow it to respond better to rain during droughts and recover faster with drought-breaking rains. There has not yet been enough research done to make management recommendations. Watch this space.

The FutureBeef team would like to thank the Twitter followers who participated in this discussion regarding Mitchell grass death, and also Dr Phelps who kindly provided his knowledge and expertise at short notice to answer these topical questions.

What has happened to the Mitchell grass on the Barkly? →

How many cattle can the country carry? →

A guide to the recovery of Mitchell grass (Project final report) →