Castration is carried out for the following reasons:

The disadvantages of castration are minor in comparison to the advantages gained. Removal of the testicles before puberty will reduce the growth rate of the calf. This is because the testicles produce hormones as well as spermatozoa. The major hormone produced by the testicles is testosterone, more commonly referred to as male hormone. Testosterone has an anabolic action – it promotes muscle growth.

Castration should be carried out on bull calves when they are very young, and certainly before six months of age. On larger properties with large numbers of breeding females this may be difficult to achieve, particularly if calves are born at the start of the wet season (as recommended) or just after the last muster the previous year.

With all methods of castration effective restraint (i.e. calf cradle) is essential for the welfare of the calf and the operator. Whether performing surgical or non surgical castration it is important to disinfect equipment in an antiseptic solution, between animals, and have a separate bucket of antiseptic for washing hands. Information about options for pain relief during castration can be found at Pain relief medication for beef cattle.

This is the most commonly used method of castration in Australia.

The testicle can be removed by pulling on the exposed testicle (this is less suitable for older calves) or by rubbing the sharp blade sideways on the exposed cord to scrape the blood vessels. Do not make a clean sharp incision of the cord as this may lead to excessive bleeding. The most desirable method is to remove the exposed testicle using triple crush emasculators which crushes and cuts the blood vessels and hence minimises bleeding. Emasculators are the preferred option for older calves and for castrations done in hotter weather.

Good hygiene is essential when castrating. It is preferable that the scalpel and emasculators are soaked in disinfectant between operations and that the disinfectant is changed after every 20 animals. Poor hygiene may lead to infection which delays healing and may set back growth. Fly control should be considered at certain times of the year. Calves should be vaccinated against tetanus. 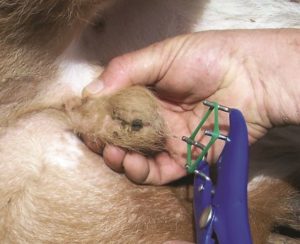 An elastrator ring placed above the neck of the scrotum will cut off all blood vessels and after a period of time (usually three to six weeks) lead to that part of the scrotum and its contents (mainly the testicles) dropping off.

Some cattle breeders prefer this method because it is a non-invasive method of castration. Another advantage of elastrator rings is that little or (usually) no bleeding occurs. There is no scientific evidence that use of elastrator rings reduces contamination by tetanus or other organisms.

Because the elastrator rings are designed and made for use on sheep, they are generally only able to be used on smaller calves. It is difficult to place the ring above the testicles of larger animals. The Australian Code of Practice for the Welfare of Animals states that elastrator rings are only suitable for calves under two weeks of age. 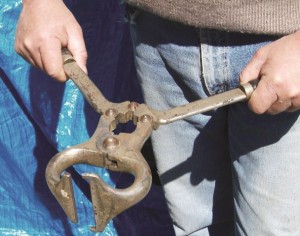 Burdizzo is the trade name for an Italian made bloodless castration pincers. The principal of operation is similar to that of the elastrator ring. If used correctly the blood vessels and spermatic cord are meant to be irreparably crushed, thus stopping blood supply preventing testicle growth and function. Within six weeks atrophy of the testicles should be complete.

The Burdizzo has the advantage of elastrator rings in that it is non-invasive and causes no bleeding. Unlike elastrator rings it can be used on older animals. However the Australian Code of Practice for the Welfare of Animals states that this method should only be used on calves under six months of age if done without anaesthetic.

This information is only intended as a brief overview of castration methods.