As the natural process of rundown ties-up nitrogen in organic forms that are unavailable to pastures, one of three ways to address the issue is to increase the rate that nitrogen cycles within the pasture system. Mechanical options such as single cultivations, cultivated short-term fallows and crop-pasture rotations all increase nitrogen cycling. Responses to increased nitrogen cycling will depend on pasture condition, the level of disturbance and the amount of plant death.

The most commonly used mechanical options are:

An economic comparison of these options can be seen in Figure 1.  It shows the comparison between the net present values and the benefit:cost ratios of different rundown mitigation options over 30 years. The abbreviations BP, CS and HS stand for blade plough, cultivated strips and herbicide strips respectively.  The dotted line represents the break-even point. It’s important to note that only cultivated fallows and blade plough renovations showed positive returns over 30 years. Other, less productive country (that is, lower fertility and/or lower rainfall) did not show positive returns for any of the cultivated options.

Mechanical options are typically used for sucker control, with pasture renovation and improved nitrogen cycling providing additional benefits. Nitrogen cycling improvements from cultivation depend on the intensity of the renovation, the relative soil fertility, how rundown the pasture is and the seasonal conditions following renovation. With repeated cultivations, the response achieved within a pasture will also decline (see Figure 2 below).

The majority of the organic nitrogen is located in the top 30cm of the soil as organic matter, with the highest concentration in the top 10cm. Therefore disturbance of the top 10cm  of soil and killing the existing plants is essential for cycling this nitrogen into the soil.

As nitrogen cycling is maximised when all of the existing grass is killed by mechanical renovation, it is necessary to have a good seed bank so the pasture can quickly regenerate. If your pasture has not set seed for a long time, you will need to add seed as part of the renovation or look at alternative renovation options.

Using a blade plough to control regrowth is often seen as a good opportunity to renovate and establish pasture. However the cost is high and the resulting seed bed is not good for sowing pastures, especially small-seeded legumes. The surface is too rough and uneven resulting in seed being buried too deep or with poor soil-seed contact and a dry soil profile. Using a blade plough or cutter bar can increase infiltration for many years depending on the soil type. However, after several passes a hard pan can form at the depth of the implement and cause future infiltration issues (Figure 2). Plant growth, scalding and erosion issues can also arise if such implements are used on soils with dispersive layers.

Responses to single cultivations are variable depending upon pasture condition, the aggressiveness of the cultivation treatment and the seasonal conditions (amount of rain) after the treatment. Cultivation treatments can stimulate nitrogen mineralisation from soil organic matter with greater mineralisation occurring when the soil is disturbed extensively and most of the existing plants are killed. However, responses reported by graziers and in trials have been variable with positive responses in some instances, no response in others and negative responses also being reported. 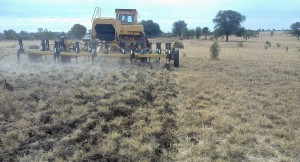 Responses to single cultivations are more reliable and effective where reduced nitrogen availability is also associated with land condition decline (i.e. where the soil has set hard and there is poor infiltration). In these circumstances, cultivation can both mineralise nitrogen and improve water infiltration, which leads to better pasture growth. If well managed, the improved pasture growth can lead to long term improvements in ground cover and infiltration. However, nitrogen will continue to be tied up in soil organic matter, which will lead to declining pasture growth over time. This response mirrors the response from blade ploughing for regrowth control described in Figure 2. Cultivation treatments would need to be repeated in later years to maintain higher levels of pasture growth which may not provide good economic returns (Figure 1).

Short-term fallows of 3 to 6 months with several cultivations that break up and kill most of the pasture sward effectively renovate rundown pastures and improve pasture growth by approximately 50% (Graham et al. 1985).

In some situations, fresh seed might need to be applied to re-establish a pasture of your chosen species, especially if undesirable grasses have seeded in recent years.  Also, short fallows can provide the opportunity to establish legumes into the pasture, as grass competition is removed, soil moisture is accumulated and a seedbed is generally prepared.

However, you need to consider the following before implementing a ley farming system:

Other options that may increase nitrogen cycling

There are other options that may increase nitrogen cycling, however the amount of nitrogen cycled and the effectiveness is either unknown or poor relative to cultivation. These practices include:

The majority of the organic nitrogen is located on the soil surface as organic matter, making disturbance of the soil and killing the plants essential for cycling this nitrogen. Therefore, activities like slashing, grazing and spraying will not deliver high levels of nitrogen in a form that is available for pasture growth, as there are very low amounts of nitrogen within plant tops compared to the amount located in the top 30cm of the soil.

A printer friendly version of this information is available on our Fact sheet: Dealing with sown pasture run-down: increasing nitrogen cycling (PDF, 787KB).

For more information about sown pasture rundown contact the Department of Agriculture and Fisheries on 13 25 23 (cost of a local call within Queensland) or 07 3404 6999, or email callweb@daf.qld.gov.au.

Go to top of page