Trees and shrubs are increasing in northern Australian grazing lands. Because trees and shrubs can compete with pastures for nutrients and water, increasing woody cover can cause declines in pasture growth and livestock carrying capacity.

What are we doing about it?

The ‘Shruburn’ experiment was established at Kidman Springs in 1993 to answer the following questions about how fire can be used to manage woody vegetation:

The experiment consists of two sites, one on a black soil open grassland and one on a red soil open woodland.

On each site we are testing the impact of different fire intervals (every two, four and six years) and season of fire (early dry season in June and late dry season in October) compared to no fire, on woody cover and pasture composition.

See Figures 1–2 for experimental layout, and effect of treatments on woody cover as seen from aerial photos taken from a helicopter in 2013. 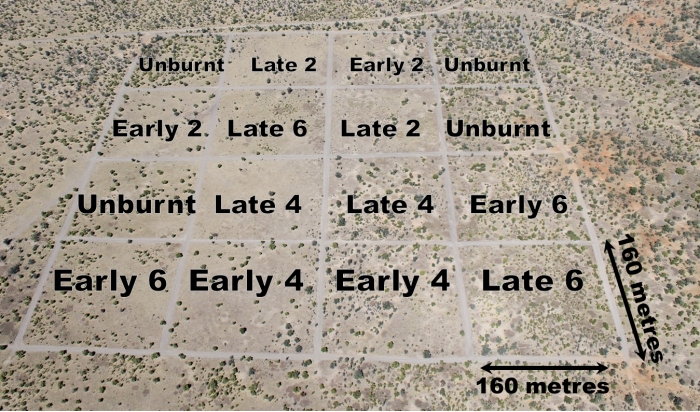 To learn about the Shruburn study

Additional information about the topic

Slower than the eye can see is about woody cover change in the Victoria River District since settlement, by Darrell Lewis.

The Savanna burning book is the most detailed book you can find on how to burn and why for northern Australia.