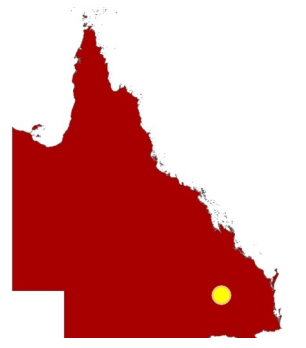 stablishing tropical legumes into existing pastures by feeding the seed to livestock is used by some graziers in native pasture systems across monsoonal areas of Queensland. To test whether this technique has application in a buffel grass pasture, a trial was initiated in 2018 on a property near Wandoan in Central Queensland where desmanthus seed was fed to cattle grazing an existing grass paddock. The result has been low legume numbers, especially in areas where there is strong competition from established grass tussocks. In this situation, conventional pasture sowing methods would have likely been a better choice.

A keen interest in testing legumes

Dennis and Barb run a mixed farming operation, including beef cattle on native and improved pastures. They operate in the Wandoan district located at the headwaters of the Dawson River  catchment, around 400 km south of Rockhampton. They have previously hosted a number of research trials with the Queensland Department of Agriculture and Fisheries and were interested to try faecal seeding as a way to establish legumes into existing grass-only pasture.

Faecal seeding is a term used to describe feeding pasture seed to livestock so that seed is distributed across the paddock through faeces as they graze. The seed is mixed with loose lick or concentrate supplement, consumed by livestock, and undigested seed passes through the animal into cowpats on the ground, spread over the paddock wherever cattle travel and camp.

At the property, a 50 ha paddock was selected to be used as an trial area for faecal seeding. The paddock is mostly cleared, with buffel grass-dominant pastures on Brigalow clay (Figure 1). Faecal seeding is viewed as a way to overcome some challenges associated with pasture establishment; challenges such as the cost to purchase or run machinery used to till soil or broadcast seed, and steep or rocky terrain where it is hard to get large equipment over paddocks. As faecal seeding is a natural way native plants, weeds and pastures spread seed, many hope that by replicating the activity, they can spread their desired pasture seed over a paddock with minimal cost and effort.

Prior to starting faecal seeding, the pasture was grazed over the summer-autumn period in 2017-18. Between August and September 2018, when the pasture was hayed off, a loose lick supplement was blended with uncoated and unscarified desmanthus seed (cv. ‘Progardes’). The mixture went into five troughs used by 50 cows with calves, and the troughs were shifted around the paddock and refilled every three days. A small scoop of bare seed was added to each trough at each re-fill, which equated to a total of 3 kg/ha seeding rate over the feeding period. The supplement was well received by the cattle and the blend was consumed by the stock over six weeks. Desmanthus seed is naturally hard seeded to allow for unreliable rainfall conditions.

Spreading via the rumen of livestock places seed around a grazed paddock to slowly soften and eventually germinate on whatever rain falls (Figure 3).

The Wandoan region has an annual average rainfall of 650 mm, falling mostly in the warmer months October to March. During summer of 2018-19, after the seed was spread, less than 390mm rain fell, making it one of the driest years on record. Significant rainfall fell in February of the second summer.

Pasture composition assessments were taken before the trial was started in 2018, and then up to and including autumn 2021, to assess the legume population density across the whole paddock.

After four years of measurements, the desmanthus population that established is insufficient to provide a production benefit (and therefore a return on investment) now or in the immediate future. A legume population of at least 4 adult plants/m² is needed in the long term, and legumes needs to contribute at least 10-20% of total pasture biomass before measurable production benefits occur.

Table 1. Average plant density across the 50ha paddock from the time of sowing to autumn 2021.

The highest density was near the water trough with 0.48 plants/m² in April 2021. The reason for this was little-to-no pasture around this part of the paddock providing very little competition for moisture for the desmanthus seedlings. Across the paddock where there was strong buffel grass competition, the desmanthus seedlings are far and few between. Overall, after four years the established population is about 2% of the target that is needed across the whole paddock for production benefits.

The cost to undertake this trial for the 50 ha paddock was approximately $5,000. This includes the seed and loose lick supplement cost but not the cost of the feed drums or the labour to fill them up. While it is a cheap way of distributing seed, faecal seeding creates uneven seed distribution (mostly around stock camps and water) and seeds can drop where they are also competing with established grass for moisture. The method potentially has more likelihood of success in less competitive pasture and in locations with more reliable rainfall.

Other trials investigating various legume establishment methods have been conducted on this property over the last 5+ years. Paddock preparation techniques such as seedbed cultivation to remove existing plants and store moisture in a fallow for a few months before being sown using a planter, has resulted in very good desmanthus establishment. These techniques resulted in 5 – 20 plants/m² two months after sowing in autumn 2015 and 6–35 plants/m² after the second growing season in autumn 2016.

Preparing a seedbed, fallowing and sowing with a planter over the whole paddock is more expensive than faecal seeding. An economic analysis of multiple establishment techniques was undertaken and reported in 2011 (Peck et al 2011). It suggested that preparation of a whole paddock, fallowed with four passes of cultivation and sown with a tropical legume such as desmanthus was estimated to be $210/ha. This estimated cost covers the time out of production for the paddock (6 months in this analysis); fertiliser; rhizobia; and seed. Based on this 2011 value, sowing 50 ha at Dennis’ using better paddock preparation would have totalled $10,500 compared to $5,000 to spread seed using lick. While the cost is double that of feeding seed, the legume establishment obtained is more than 50 times higher (0.09 plants/m² compared to 5 plants/m²) with this more reliable establishment technique.

To reduce paddock preparation costs and still provide a high likelihood of success, cultivating strips into grass paddocks and sowing could be an option. This could halve the establishment costs if, for example, 5 m wide strips are prepared for sowing and 5 m of grass retained.

Dennis reported that the best thing about faecal seeding was that it “didn’t take a lot of effort; the hardest part was remembering to add the seed to the lick when it went out.”

Due to the price of the seed Dennis found it challenging to feed seed straight to the cattle, however he decided to try the same technique in another paddock using less seed in the mix. He commented “The seed went through the animal and after a heavy downpour, was washed over the bare soil into the contours. There are a few plants growing there now (in the contours).”

His suggestion to other graziers interested in this method, is to “give it a go; if it works, it works”. He is happy that there are a few plants established in these paddocks but said that he would use conventional sowing again – especially since he already has the equipment to do so. Looking forward, he is hoping that in the coming summer he’ll be able to plant an old cultivation paddock to permanent pasture, this time with desmanthus and Gatton panic.

This project is jointly funded through Meat and Livestock Australia, Department of Agriculture and Fisheries, and supported by Agrimix.