Legume BMP in the Brigalow Belt

Legume Best Management Practice in the Brigalow Belt Bio-Region project aims to improve the productivity, profitability and sustainability of beef enterprises through reliable and successful use of pasture legumes. This will be achieved through coordinated research and extension to improve the knowledge and skills of graziers and industry advisors in using pasture legumes.

The Brigalow Belt is a critically important region for beef production in northern Australia. This region carries a high proportion (>30%) of the northern Australian beef cattle herd on 15% of the grazed land area and supports high animal performance (reproduction and growth rates). Such carrying capacities are largely possible due to the extensive areas of sown pastures growing on relatively fertile soils with moderate rainfall. 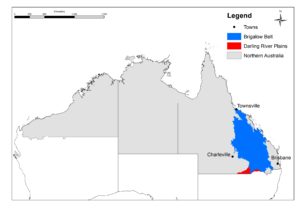 Pasture legumes have been identified as the best long-term option to increase the productivity and returns from both sown grass pastures and native pastures across the Brigalow Belt.

Studies comparing grass-only pastures or native pastures to grass-legume pastures demonstrate the productivity increases from legumes are significant. For example:

Despite impressive results from legumes in trials and some commercial pastures, adoption levels remain low in the Brigalow Belt. Leucaena is one such example. Leucaena is one of the most widely grown pasture legumes, however it has only been successfully adopted on about 3% of the area of pasture land that it is adapted to in Queensland (Peck et al. 2011; Beutel et al. 2018). These low successful adoption rates mean there is a huge opportunity to increase beef production, and potentially enterprise profitability, for decades to come.

This project consists of an integrated suite of participatory research, development and extension activities which will bring together the knowledge and experience of scientists, graziers and advisers. Development and extension activities will utilise past research to help graziers to establish and manage pasture legumes to increase productivity and resilience on their own farms. At the same time, research with pasture legumes will confirm the most persistent and productive varieties, further develop practical ways to establish  legumes into existing grass-only pastures and increase the productivity of the pastures through fertiliser application.

The project has four main components and activities:

Legume Best Management Practice in the Brigalow Belt Bio-Region is a five-year project to be completed in 2022.

This project has been jointly funded by Department of Agriculture and Fisheries, Queensland Government and Meat & Livestock Australia.

Contacts for the Legume BMP in the Brigalow Belt Bio-Region Project: