Legumes for long-term pastures on high fertility soils in Queensland

In long-term pastures a grass and a legume are usually planted at the same time (except for leucaena, where the grass is established after the legume). These pasture types can be slower to establish but the grass and legume components are very persistent once established. Often the legume takes some time to increase in density but this is necessary for the pasture to remain productive in the longer term. Some leucaena pastures continue to be productive and persistent almost 40 years after planting. Two other tropical legumes with potential to survive in long-term pasture systems are Caatinga stylo and desmanthus.

Two cultivars are Unica and Primar. Unica is erect and flowers 2 to 4 weeks later than Primar in the establishment year. Primar is earlier flowering and has more tolerance to cool conditions but has been affected by anthracnose in seed production areas. 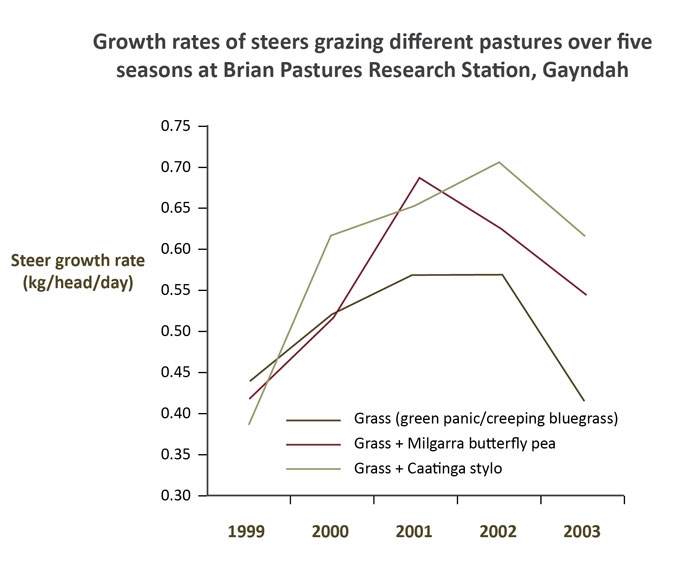 Growth rates for steers grazing desmanthus/grass pasture at Brian Pastures Research Station over six years ranged from 0.43 to 0.66kg/head/day. This compared with a range of 0.29 to 0.63kg/head/day on grass only pasture.

Forage yields of leucaena in the lower rainfall (650 to 750mm) sub-tropical areas are low but the palatability and nutritive value of leucaena and the associated grass is high. As a result high animal growth rates of over 250kg/head/year (0.7 to 0.8kg/head/day) are regularly recorded.

To maximise growth rates and to prevent toxicity from mimosine and its derivatives, an anaerobic rumen bacteria (‘rumen bug’) should be transferred to the rumen of all cattle grazing leucaena. This can usually be achieved by drenching about 10% of the animals in a group and allowing the bacteria to transfer to the rest of the group.