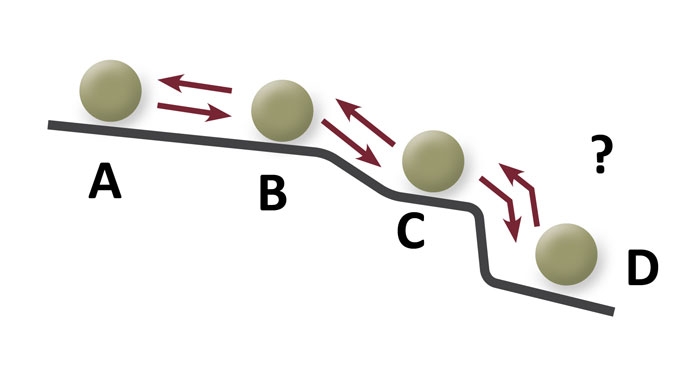 Land in condition A is relatively stable. Land that is trending towards condition B can be fairly quickly reverted to condition A by a change in management.

However, land in condition B is susceptible to a quick decline to condition C. Reversing this change may require a major change in management and will take some time to occur.

Where are you paddocks on the ‘slippery slope’?

It is important to distinguish between cosmetic changes in land condition and real changes. For example, well-managed grazing land in condition A with a good density of perennial plants may appear to change to condition B during a run of dry years, but it should quickly resume the classic look of condition A with one good wet season.

A common misreading of land condition is that land in condition C is ‘OK’ because it manages to produce green cover during a run of wet years. However the perennial grass density remains low and, even with some recovery of perennial grasses, soil organic matter and biological activity take much longer to recover.

What impact does drought have – where does it push the ball?

The better the land condition going into the drought, the more resilient the grazing ecosystem will be, and small declines in condition can be tolerated. Land that is on the verge of C or D condition is very susceptible to drought. The consequences from a pasture productivity point of view will be felt long after the drought has broken. Degradation is loss of land condition, which generally occurs as a result of a combination of poor management (overstocking) and poor seasons.

Post-drought management is just as crucial to land condition as management during drought. Strategic spelling and timely weed and woody regrowth control are very important following a drought.

To learn more about how to assess the condition of your land and the economic consequences, talk to your local beef extension officer about attending a Grazing land management workshop.

Soil biology – what is it all about?
Managing for the dry years and drought
Sown pasture rundown 1: The productivity decline of sown pastures over time